printed on glass, mounted on 6 walls, 2 of them with lighting boxes in the back

Staircase with glass bricks on the north wall

Stairs to the 4th floor

When it was decided that the lobby and staircase of the Johanneshouse in Saarbrücken/Germany should receive a new, friendly look and a more uniform design, the Bishopric of Trier invited artists to tender for the job of creating a new interior. Their design solutions, it was stipulated, should take into account the Catholic background of the building and its connection with John the Baptist. They should also consider the very different visitor groups that use the building. Furthermore, any design should incorporate the glass brick wall as well as the staircase, lift and floors and take into account the positions of the walls. The jury decided in favour of my concept, which set out plans to fill the entire south side of the staircase from the lobby right up to the fifth floor with a specially created work entitled “Reflections”.

Light Metaphoric Of The Gothic Age:

The glass wall on the north side of the staircase resembles a huge gothic cathedral window, and it was the symbolism of light underlying its concept that inspired my design. Light enters the space as a whole through the northern wall, which is made of glass bricks. Multicoloured but non-figurative in their design, the wall’s light-flooded, coloured blocks could represent almost anything. Their light creates abstract areas of colour that transform into concrete, earthly figures – or the reverse: the earthly as it transforms into immaterial light. On the southern wall, my artwork extends upwards to the fifth floor, repre- senting the gradual transformation from the material, i.e. the earthly, to the immaterial, to light. Alternatively, following the progression from the upper floors downwards, it symbolises the transformation from the immaterial to the earthly. The light of the abstract north wall is reflected in the ever-changing south wall in every storey of the building.

The Sheep And The Water:

In the lobby, two light-boxes separated by a door cover the entire wall and present a scene of a wide, sunny pasture with a flock of grazing sheep. As a flock, sheep also represent us as human beings, with Jesus as our Shepherd. The lamb is the main attribute of John the Baptist. On the second floor, the images of these animals are reflected in calm waters. On the third, a rising wind appears to break the water’s surface and the creatures’ reflections break up in the ripples. On the fourth floor, their images are even more strongly deconstructed to create a sense of painterly depth. Everything appears to dissolve until finally, on the fifth floor, the im- ages of the sheep are completely washed over with water. What had previously been the sky on the ground floor has now become water, ultimately representing a heavenly ocean.

Water can symbolize man’s path to God through baptism. The entire world is reflected in water, and even though the reflections depicted here are of the real world, they are no longer actually part of it. Here, reality can become fluid, breaking up into abstract or new forms as the water moves. This can result in multiple realities, which in turn pick up on multiverse theory. This postulates that although the universe consists of a limited number of “building blocks”, it is infinitely large and incorporates infinite numbers of universes, meaning every possible option exists somewhere or other. I spent one week with the sheep. Every day they grew more and more relaxed in my presence. I learned a lot about them and finally gave up on the idea of capturing the panorama shot of sheep grazing in a meadow. I began to realise instead that the animals would never all stand the way I wanted them to. Nor would the sky behave as I required. And the meadow, which was to be neither too lush nor too sparse, disappeared unrelentingly into the sheeps’ stomachs. I produced a collection of shots of individual sheep portraits, cloud formations and meadows. 2000 images in total. And it was these that formed the basis of the idea I was to realise later. The sheep never actually stood this way on the meadow. Nor did the clouds hang in the sky like this. And I never saw sheep reflected in water. So my pictures are no more than images. Symbols. 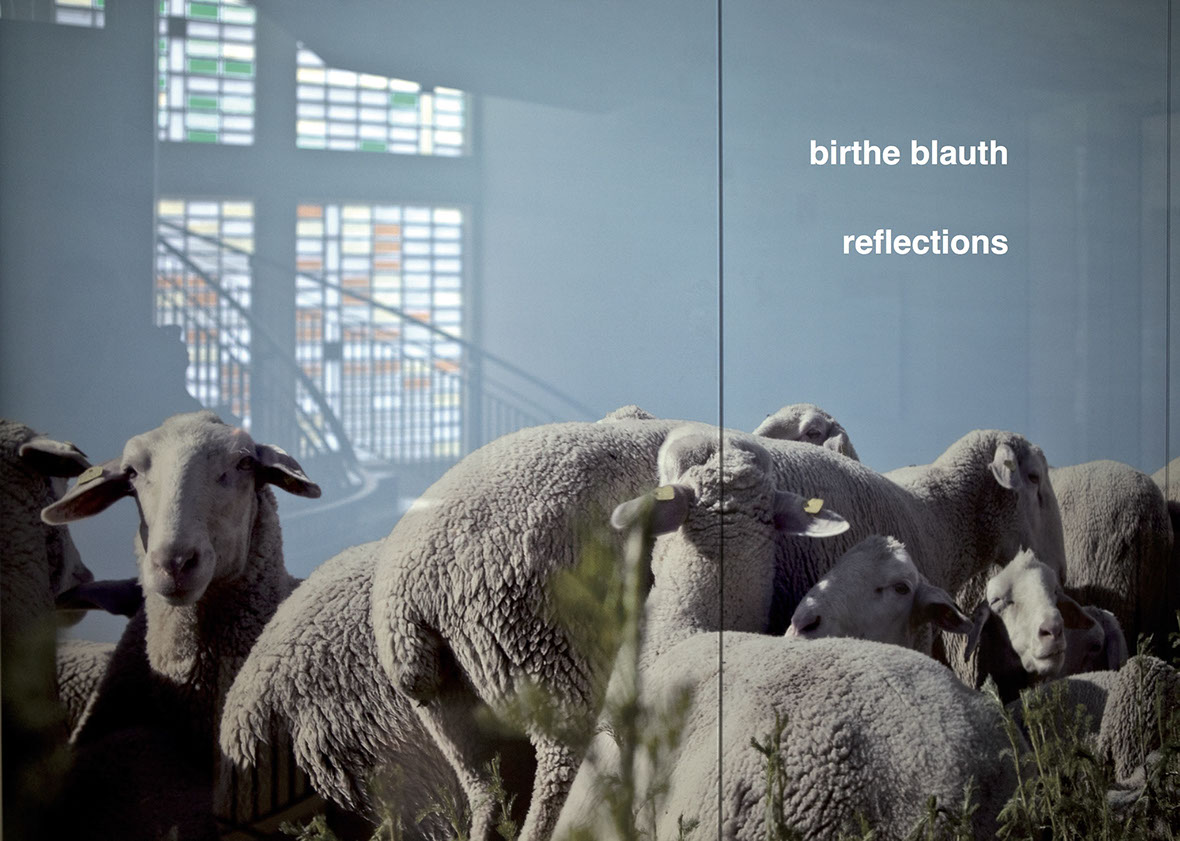 Documentation with many images about the 5 storey installation in the Johanneshouse Saarbrücken / Germany,

Prize: 15,- € including transport in Germany

(please ask for prizes into other countries)